While I’m no stranger to challenges, Vested presented a unique one I had never faced before: turning what could be dry academic theory into a compelling commercial brand and a sweeping business movement.

What’s more, rather than creating a brand and market share for a physical company, product or service, this time I needed to name and build market share for a concept. Vested was a research-based methodology that needed to become a new category in business models and practices, while also remaining something that could be studied and taught by academia.

It was part brand, part theory and 100% transformative. (And not exactly easy.)

It all began with research conducted by the University of Tennessee and funded by the United States Air Force. Lead researcher Kate Vitasek and her team studied the world’s most successful business relationships to determine what made them work. What they found was “win-win” thinking deeply embedded in the parties’ relationships that influenced how they worked together, using shared goals to drive innovation and create value that did not exist before. The research was codified into five rules for successful business relationships. 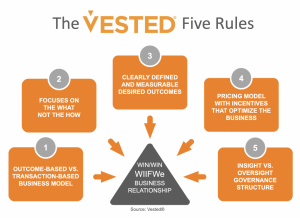 The team realized early on that this methodology and model for highly collaborative relationships had the transformative potential of other well-known business management philosophies like Lean and Six Sigma. They didn’t want it to be trapped within the walls of academia; they wanted to take the Vested concept and institutionalize it across all businesses, in all industries, throughout the world.

That’s where I came in.

What’s In a Name? (Answer: Everything)

My first task in creating the Vested movement was to name it. Naming is crucial in developing a successful and powerful brand. The name needed to both define the movement and stand alone as a compelling brand name.

As with any new brand, I needed to consider the persuasive power of names to build confidence in a brand. And with Vested, I was also looking to create a whole new industry around the methodology. We needed something that summed up the key tenets of this new methodology, its intellectual property value, and all the benefits it offered. It needed to be catchy, powerful and evoke the very heart and soul of the movement we were creating.

In addition, I wanted to create a “verbable” name. Verbable names distinguish their brands as THE market leader in consumers’ minds, creating great brand equity. Think of brands like Google, TiVo or FedEx and how they’ve come to be synonymous with the services they provide. You don’t “perform a Google search”; you Google something. You don’t “record a program with your TiVo”; you TiVo it. If you want your package to arrive overnight, you don’t “send it by FedEx”; you FedEx it.

Which is why, after an intense brainstorming process, we chose “Vested Outsourcing” (later transitioned to simply “Vested” at the right time in the brand’s adoption). “Vested” articulated the highly collaborative relationship between participating parties in this new business model. It leveraged the meaning of the common word “vested” but took it further, conveying all the foundational principles of the new methodology: shared value, behavioral economics, mutual success, and the creation of value that did not exist before.

It was so much more than just a brand name; it embodied everything the movement stood for and offered. As soon as people heard the name “Vested,” they’d have a sense of what it meant, no further explanation needed.

It was all coming together. With the right name in place, the next step was creating a category for this new movement.

I knew that in order to fully tap into its transformative power, the Vested movement needed to be more than just a concept; it needed to become an industry standard and a new category for business relationships today.

We didn’t want Vested to be seen as just a next-generation model for business relationships or a “new and improved” spin on yesterday’s methodologies. Making it a new category in and of itself would enable it to become a standard against which all other methodologies would be compared. This would prevent Vested from becoming fragmented with no real market stake for the creators, as had happened to the developers of Lean.

With the brand’s name in place, I next developed an integrated, constantly evolving branding and market adoption strategy, which included positioning Vested as its own unique category and creating an entirely new lexicon for its key principles and ideas. We were now poised to introduce Vested to the world.

Along with Karl Mandrodt and Mike Ledyard, Vitasek began traveling the globe, teaching and speaking to spread the Vested movement first in the outsourcing and supply chain verticals. Additional powerful Vested relationships rapidly followed with leading experts, innovators and organizations who embraced the movement and have contributed to the expansion of the Vested approach across all verticals and aspects of business.

Today, the Vested business model, methodology, mindset and movement is being adopted across all industries and markets and creating sweeping changes in how business is done.

How far has it reached? Here are just some examples:

And it’s still evolving and growing.

Companies and organizations across the world have gone Vested including:

For a movement with unique challenges and no roadmap, I’d have to say we’ve done pretty well so far.

To learn more about Vested, as well as learn how to make your organization a Vested organization, visit vestedway.com.

Ask any coach—or at least, any good coach—to name the most valuable tool in their arsenal, and they'll likely point to their playbook.

It is my hope that there is something within these pages that will speak to you the way it has for me.

If nothing else, I hope it is an enjoyable “peek behind the curtain.”